WCRT’s river restoration team enjoyed another busy but satisfying year in 2021, covering a wide range of projects and catchments.

River restoration works in the Vale of Lorton

In partnership with the Environment Agency’s River Restoration Strategy (RRS), we undertook a series of delivery projects called ‘low-risk barrier removal’ which followed on from investigative work completed in 2020. The main aim was to remove barriers to fish migration from streams, becks and other tributaries of the main rivers, but also improve the health of those watercourses by re-naturalising the way they function. Four opportunities were identified for removal or easement in summer 2021 – two on the River Cocker catchment, one on the River Marron catchment and one on the River Derwent catchment. Working with the EA team, we followed the designs suggested by our subcontracted designers (APEM) and used various local contractors to deliver the works successfully between June and September 2021. In combination, removing these four barriers enhanced two hectares of water-dependent habitat and opened up 16km of upstream river to fish passage – not bad for a low-cost, low-risk project!

We also worked with United Utilities to deliver the innovative ‘Thirlmere Resilience’ project on Wyth Burn and Raise Beck, both of which feed into Thirlmere reservoir. The project made small adjustments to the rivers and their riparian habitats, to reduce the amount of sediment they deliver into the reservoir. By trapping sediments and gravels on the floodplain (something that happens less than it should, due to historic straightening of the river channel) we can help ensure cleaner water reaches Thirlmere. In tandem, we are tackling invasive species including Himalayan Balsam and Japanese Knotweed, which ties-in with other works UU are conducting to increase ecological diversity, such as tree planting and peatland restoration, to assist natural regeneration. 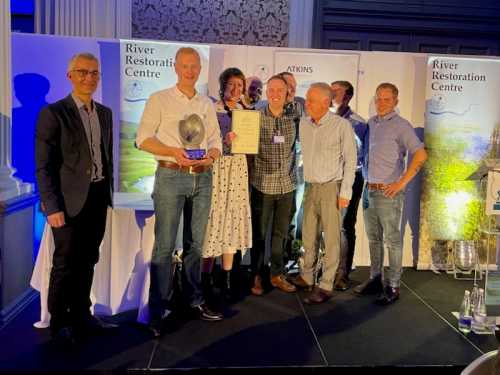 And work on the River Keekle has continued after the successful delivery of the largest project ever undertaken by WCRT, in 2020. We continue to monitor the site through electrofishing surveys and regular geomorphological assessments (assessing changes to the river and its riparian corridor). We are also planting trees across the site to replace those that had to be felled to allow removal of the river’s plastic lining. And a lovely end to the project came in October, when we won the prestigious 2021 UK River Prize – awarded by the River Restoration Centre – which celebrates best practice across England, Wales, Scotland and Northern Ireland.

This news entry is related to the River Restoration Strategy project, please visit it for more information.